Customisability and upgradability are noteworthy blessings of building a PC. Whether you root for absolute performance, aesthetics, or something in between, picking the correct RAM plays a crucial role.

This write-up is a brainchild that interprets my decades of experience as an enthusiast. 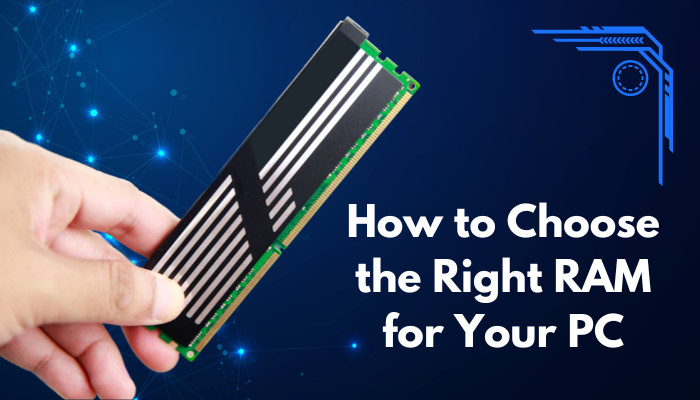 So, tag along and help yourself.

What RAM Is Compatible With Your Motherboard

Remember how effortlessly you answered what RAM is when the 3rd-grade teacher asked? I wish it were that simple.

See, most people don’t know the complexity of PC components. For example, an extremely common notion of RAM is that it’s a temporary memory that stores real-time app instructions & data. This is true, but it has more aspects, such as data rate type, capacity, speed, channels etc.

To pick the best RAM, you need to understand these terms better.

Here are the factors to consider for selecting the best memory for your computer:

Double Data Rate (DDR) is a substantially better memory technology in contrast to the former Single Data Rate (SDR). DDR memory can write at the rise and fall of the clock cycle.

Got your head spinning? Alright, let me illustrate.

Think about rope skipping. If you say Hello when you attempt to jump and say it again when falling, you will hear it twice. Likewise, DDR memory can run 2x faster.

In addition to that, softwares like CPUZ may show your memory speed as 1200mhz, but in the Task Manager, you’ll see 2400mhz thanks to DDR technology. There’s also a thing called Channel involved. We’ll learn about it later.

Coming back to DDR, there are numbers occupied with it, such as DDR3, DDR4, DDR5 etc. So, What do they mean? 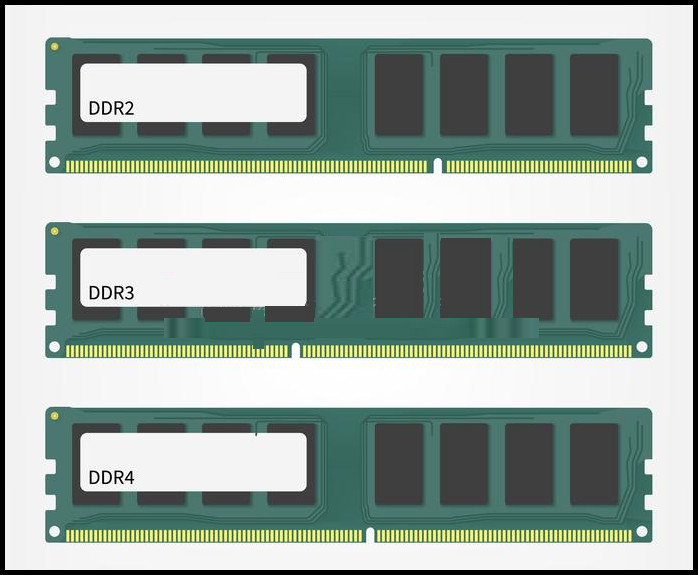 Well, these numbers indicate the generation of DDR technology. With each generation, the clock speed and capacity increased remarkably. And none of them are backward compatible.

So, once you understand what DDR is and its generation, it’s time to check your motherboard specification for the right DDR memory.

Also, check out our separate post on whether can RAM affect FPS.

The form factor is basically the physical dimension of RAM. Currently, there are two common types of memories in terms of shape— DIMM and SODIMM.

DIMM (Dual Inline Memory Module) is basically compatible with desktop motherboards. It has a pin count of 288.

On the other hand, SODIMM (Small Outline Dual Inline Memory Module) RAMs are meant for laptops and some mini PCs such as Intel NUC. And the pin count of SODIMM memory is 260. 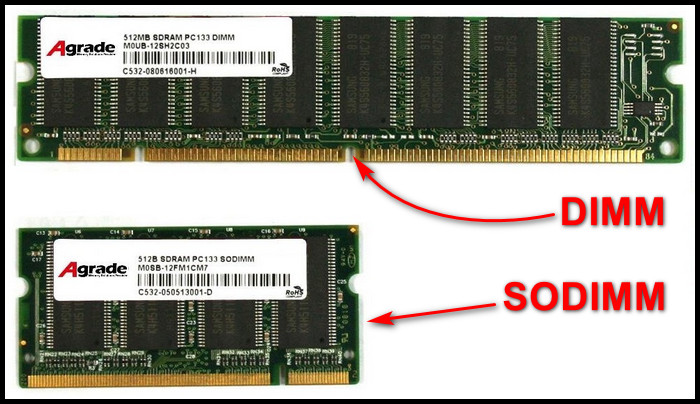 When asked how fast your RAM is, the clock speed is typically the deciding factor. The number of MT (Mega Transfer) rates can be ridiculously fast. For instance, DDR4 4400Mhz means the RAM can read and write 4.4 billion times per second. Currently,

DDR5 6400Mhz memory modules are available in the market, and 9000Mhz kits are in development.

But can you install it on your system? Or is it necessary?

You already know which DDR memory version is compatible with your mainboard, right?

Now, check the maximum supported clock speed. Both the CPU and the Motherboard can be the limiting factor. Let me simplify for you.

See, your CPU has a limit for maximum RAM frequency. So does the motherboard. Typically, the Mhz number the CPU supports is the native speed. Mainboards can go way past that. It’s referred to as OC speed.

Let’s understand this with a bit of a real-world scenario.

Moving on to our next motherboard, Z490, it has OC capability. So you can run RAM at 3200Mhz clock speed with this CPU. You can go even higher, but that will hit a diminishing return. 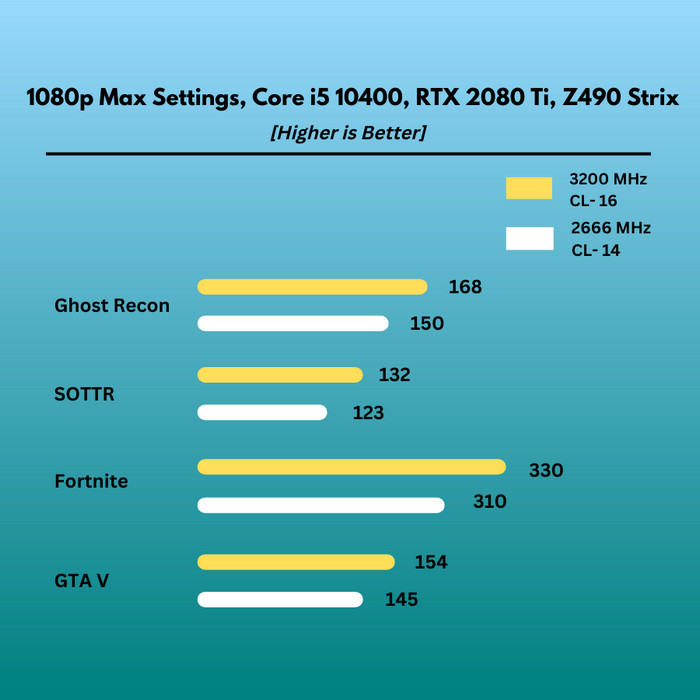 With higher tier CPUs such as Core i9 10900K, you can hit over 4000Mhz clock speed on your system memory.

So, choose the speed of RAM depending on your CPU and motherboard. As high-speed memory kits are costly, ensure they don’t go to waste.

RAM capacity has a cardinal effect on your computer’s performance, whether running a game or a productivity application.

You can’t just go and buy as much RAM as you wish unless you clearly understand why it matters.

See, 16GB RAM on modern machines is OK if you are solely playing games. However, with newer games, things can get messy when you break the 1080p resolution and opt for 2K or 4K. So, 32GB will be a safe bet for the near future.

On a different note, productive applications can heavily utilize memory, such as Android Studio, Premiere Pro, Blender etc. But that doesn’t mean you can’t use them on 16GB or less. It’s just the overall smoothness will be greater if you have memory headroom.

Not to mention, your CPU and Motherboard have a limit for memory capacity. So you can’t go extravagant with more memory. Also, they will sit idle if you can’t utilize the full potential of high-capacity memories.

Therefore, choose RAM depending on your CPU and Mainboard compatibility and workload as well.

Quickly check out our epic guide on how to increase dedicated video RAM.

Memory channel is a bridge that interchanges data between the CPU and the RAM. Modern motherboards come with two or four memory channel compatibility.

To understand this, let’s look into the nitty gritty of the memory channel with an analogy.

Imagine a restaurant (CPU) with several chefs (cores) ready to cook. Waiting for cooking supplies, such as meat, vegetables, rice, flour etc. They obtain these materials from only one source (memory channel).

Although the supplier has a huge capacity (memory capacity such as 16GB, 32GB etc.), they can not deliver goods as fast as the restaurant (CPU) can use them. So the supply chain holds the restaurant back from its peak production (performance) capability.

Now, if the restaurant can receive cooking supplies from another source (multi-memory channel), it will easily reach the maximum production rate.

To interpret this scenario in real life, I paired AMD Ryzen 5 5600G processor with 16GB (Single channel) and 8x2GB (Dual channel). And the results are shocking. 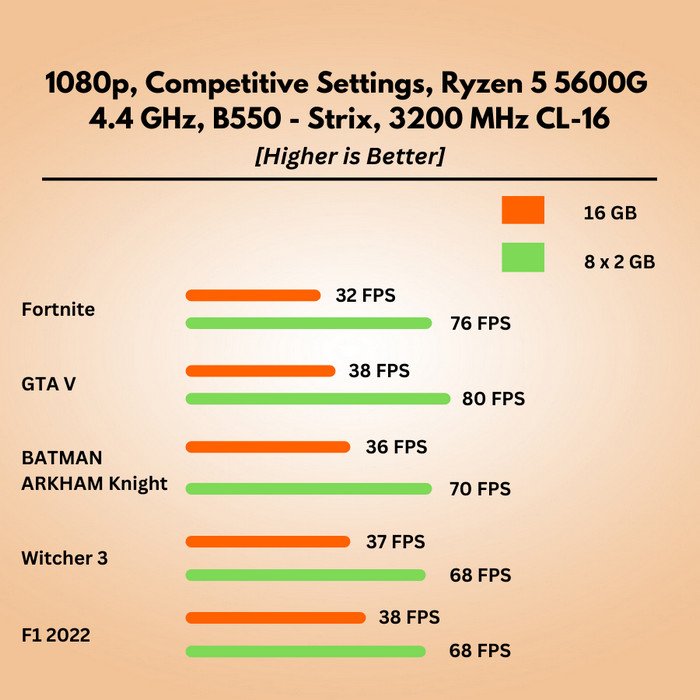 I got a 40-50% performance deficit going from Dual Channel to Single Channel. The chart below shows the summary of the tests.

So, the single channel cuts the effective bandwidth in half, adversely affecting performance. Hence you find memory kits always come in a pack of two. 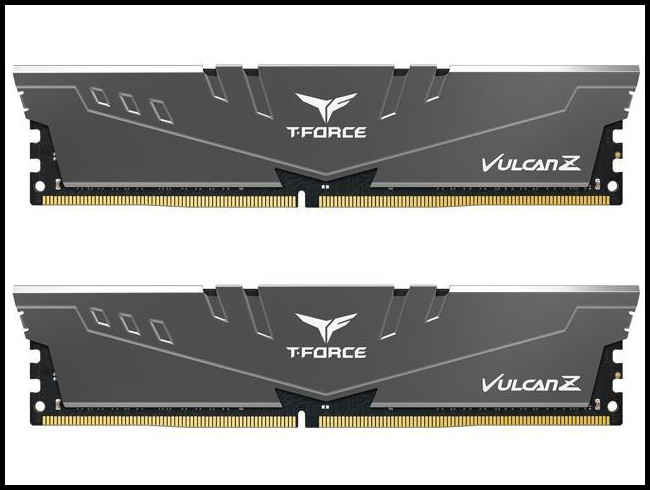 So I recommend always choosing memory in a multi-channel configuration for the best performance.

Also, check out our expert’s recommendations about the best Corsair RAM.

The memory rank is one of the most ignored specifications in choosing the correct RAM. It has a meaningful effect on overall system performance.

A memory rank is a single group of memory blocks. Each rank has a 64-bit bus that connects your memory to the motherboard. A single stick of RAM can have 1,2, or 4 ranks. A rule of thumb is More Ranks = Better, as your system’s memory controller can access each rank separately.

The CPU can’t access all ranks simultaneously because the modules share the 64-bit bus. But it can initiate an operation on one rank while another completes a task. It is called interleaving, which reduces response time and improves memory bandwidth without expanding bus width. That’s a lot to take in, isn’t it?

Moving all these technicalities aside, should you care about memory rank? Or is the performance boost worth exploring this intricate topic?

Evidently, Yes, especially if you have an AMD Ryzen CPU. Some games and productivity applications such as File Compression can get noticeable performance uplift with more ranks of memory.

There is a piece of good news, though. You don’t need to look for expensive dual-rank RAM sticks if you populate all four DIMM slots with single-rank memories. This is roughly equivalent to a dual-rank setup. However, if you target 2 DIMM slots, opting for dual-rank memory is a good idea.

But how do you know how many ranks a RAM has?

Generally, single-rank memory has memory chips on one side of the stick, and dual-rank has chips on both sides. It’s hard to tell by looking at them, especially if there’s a heat spreader. So, go to the product page to confirm.

Read more on the difference between DDR4 vs. DDR5 RAM comparison and performance benefits.

Once you check the major specification and are almost there to choose the correct RAM for your system, you may want to look at some tiny details.

The heat spreader is the metal shroud covering the RAM stick, exposing the connector pins at the bottom. It helps dissipate heat generated by memory chips.

You know, some manufacturers go with extravagant designs for the heat sink. They may look cool and whack but cripple compatibility inside the case. Besides, CPU coolers are hard to install in such a scenario.

So, before you dazzle yourself with the physical outlook of a DIMM stick, ensure it’s dimension is a perfect fit inside the chassis. Better safe than sorry!

In a typical mainstream scenario, the memory we find is unregistered, whether it’s a desktop, laptop or mini PC. However, cloud servers, big data centers, supercomputers etc.,  incorporate ECC RAM.

You know, ECC memory checks and corrects errors in data while processing. System crashes occur due to these errors. Random crashes or reboots may not be a big issue for most consumers, but they can cost a company millions. These memories can efficiently handle data errors, prevent outages, and offer reliability. 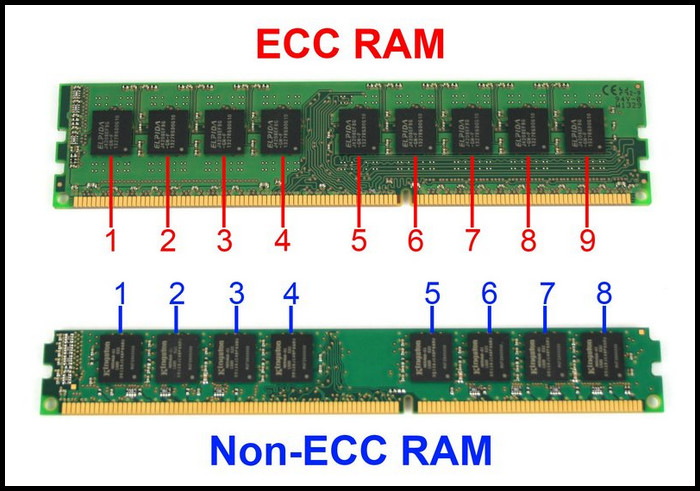 In addition to that, ECC memory is also known as registered memory. It offloads some tasks onto the memory controller.

So, all this information proves that ECC is a better technology. But is it worth buying?

For mainstream consumers, the answer is—No.

See, with all the extra algorithms and processing, ECC memories are slow and won’t benefit you in regular tasks. Moreover, most consumer-grade mainboards do not support registered RAM. And these are not cheap at all.

Lighting effect on a RAM has no tangible benefit in terms of performance. But it adds aesthetic value to your rig. It depends on how you want your PC to look.

Nowadays, RGB RAMs are insanely popular. They are more expensive because of all the shimmering lights and effects.

However, some RGB software may cause system instability from time to time. Good to keep it in mind when you are troubleshooting for a possible cause.

Related content you should read on how to allocate more RAM to Terraria.

Without RAM, there is no computer. But it can be overwhelming for you to choose the correct RAM. Check your motherboard specification and follow my guide to pick the fitting memory for your computer.

For more insights, comment down below and let me know. Cheers! 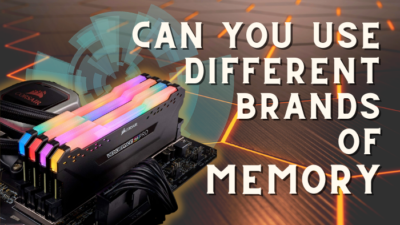 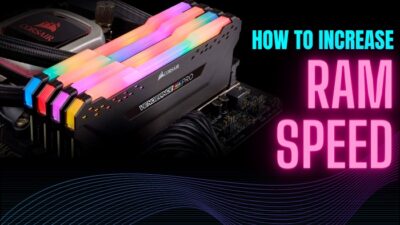 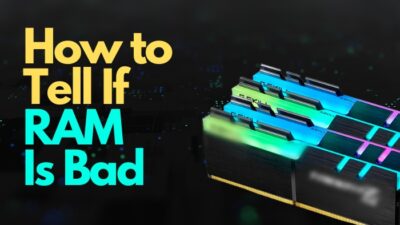