You are getting annoyed by the constant noise coming from the CPU air cooler fans and are wondering whether removing them would affect the cooler. 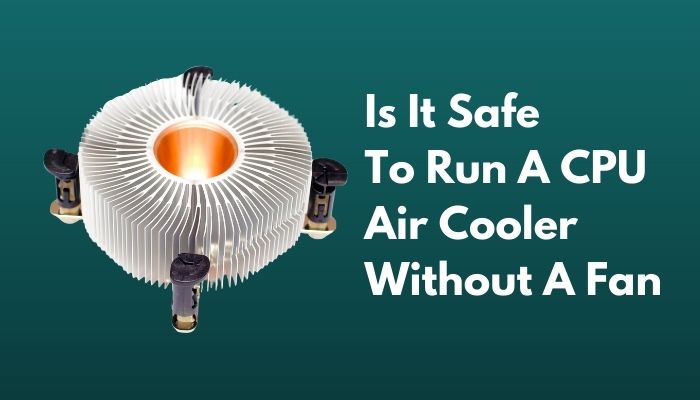 Is it safe to run a CPU air cooler without a fan?

Theoretically, it is possible to run a CPU air cooler without a fan but you can’t do this if you are not someone with a lot of patience required for planning and calculating. You will need to pay special attention to RAM temperatures if you are planning on doing this.

You just did yourself a great favor by coming here because I will share some of my experiences doing this as a tech enthusiast after I answer what’s on your mind.

Please don’t skip anything in between as everything I include here is very important. Also, if you are feeling sleepy, I recommend drinking a cup of coffee first.

Quick Navigation hide
Can A CPU Cooler Work Without A Fan?
Can You Run A PC Without Fans?
How Do I Know If My CPU Is Damaged?
FAQ
Final Thoughts

Can A CPU Cooler Work Without A Fan?

You can make it work but the results would depend on certain aspects of the CPU itself, like the layout of your case or the ventilation system used in your case. You need to be able to remove the heat from the case some other way if there’s no fan to do the job.

Another very important thing you should keep in mind is that, if you remove your fans, then you will have to say goodbye to all your demanding and resource-intensive tasks.

This is because more demanding tasks also generate more heat and if there is more heat in the case, they will just build up since there are no fans to dissipate them.

You should also keep in mind that it’s not just the CPU you need to think about cooling down.

Check out the easiest way to fix CPU cooler not lighting up.

If you are going to remove the fans, you will have to take care of the RAM cooling because that is relying heavily on the CPU fan generated air flow being available.

I think the only time you can use your computer perfectly without cooler fans is if the case already has fans built in.

I would also recommend downloading a program to assist you in monitoring the system temperatures to make sure nothing is exceeding normal temperatures.

If you don’t have much experience building PCs, I recommend getting someone more experienced to do the job for you because if things don’t go your way, it could have some negative effects on the system.

Moreover, I suggest that you keep at least one fan in the cooler to take care of the air outflow from the system.

Can You Run A PC Without Fans? 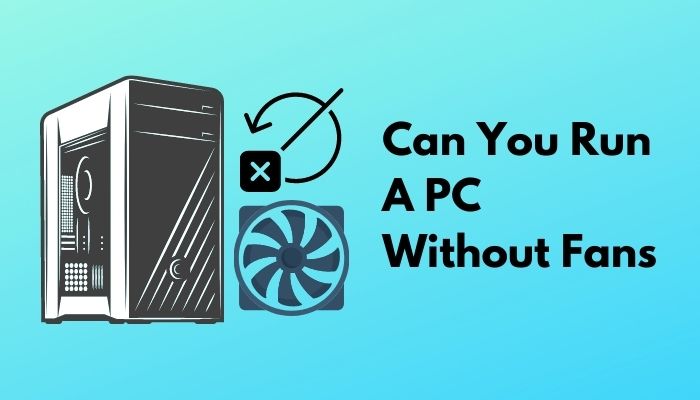 The answer to that depends on which fans you are talking about. It is definitely not possible to run a computer with absolutely no fans built in. If the reason you want to get rid of the fans is mainly just the noise, there are many ways to quiet it down.

Also, check out our separate post on does a CPU cooler need a backplate.

Furthermore, if you are thinking about getting rid of the fans in your case, then it would be perfectly fine in most situations. You would still get higher temperatures when you compare your system with another one which includes the case fans.

I recommend monitoring the temperatures immediately after removing the case fans with a program like Speccy for Windows.

This is extremely rare but if you still see really high temperatures on your temperature monitoring software, you have no choice but to use the PC with the fans attached.

If you choose to ignore this, you will probably end up with a fried CPU that has been destroyed beyond repair. A fired CPU also has the potential of taking down the motherboard along with any other connected components.

If you are using the system with a dead fan, you will eventually end up with a broken CPU.

Also, Check out our expert-recommended best quietest CPU coolers for your chassis.

How Do I Know If My CPU Is Damaged?

A computer with a bad CPU could be very devastating to most people as you will be unable to run any software or do any sort of work. Most of the time, your computer will become totally unusable if you have a damaged CPU.

However, there are some times when you only see the computer having issues at random.

Have some time to spare? Quickly check out our epic guide on how to fix CPU fan not detected in BIOS.

The very first symptom to check whether your CPU is damaged is to try powering on your system. If the CPU is damaged, you won’t see your computer going through the usual boot up process.

You will probably hear your fans and disk drives running perfectly, but the screen would be completely blank even if you try pressing random buttons on the keyboard.

Occasionally, it might also happen that you will see a blue screen appear all of a sudden while you are working on your computer or when you boot up.

Every computer has a Basic Input Output System which has many uses. One of these is to check your PC when it is being powered on.

If the BIOS manages to identify any type of hardware problems and cannot start, then the computer will produce a series of coded beeps that can help you identify the issue.

The number of beeps usually depends on the problem it has identified. An AMI BIOS typically beeps five or seven times if the CPU is at fault.

The last symptom is quite obvious. All you need to do is just take a good look at the condition of the motherboard in the CPU. Due to overheating, the CPU should have a charred appearance and even the circuit board surrounding the CPU socket will have burn marks.

This is an extreme case, though. If your motherboard is in good condition but you face the other symptoms, you might have some luck in repairing the CPU.

Question: How long can a CPU run without a fan?

Answer: My best guess is that the system will power on and run for about 20 seconds or so. After that, it will start overheating and then automatically power off.

Answer: There are many reasons to consider liquid cooling. The thin tubes of water in your average liquid cooling kit take up significantly much less space compared to fans.

Answer: Absolutely not. Liquid coolers have a sealed unit so they require little to no maintenance at all. They also don’t need to be topped up since they don’t evaporate like DIY setups.

Question: Why is liquid cooling bad?

Answer: The main reason why some people prefer the traditional air cooling method is because liquid cooling can have disastrous consequences if there are some unexpected leaks. It could end up frying extremely important and expensive components in your PC.

With the proper amount of planning and execution, you will definitely be able to run a CPU air cooler without any fans around. You just need to test it thoroughly and make sure to not push your CPU to the limit.

I hope I managed to clear all your doubts but if you have any queries, you can always reach us. Also, if you want more tech guides, please bookmark our home page. 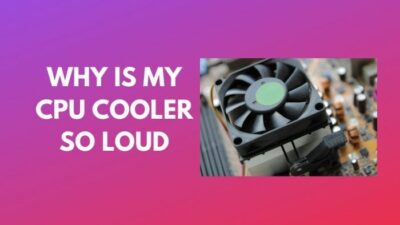 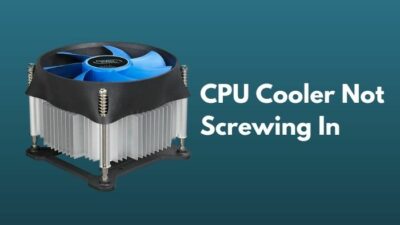 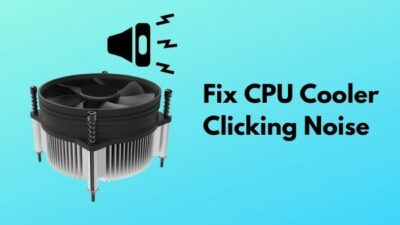 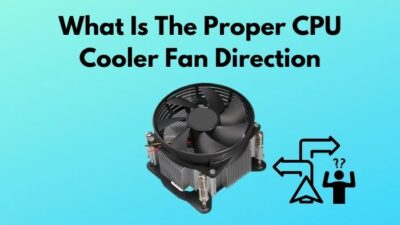 CPU Cooler
What is The Proper CPU Cooler Fan Direction? [Read this!]