If you are looking for the best be quiet! Dark Rock Pro 4 alternatives, you have come to the right place.

In a hurry? Check out my best dark rock pro 4 alternative.

be quiet! makes some of the best CPU coolers in the market. Among them, the Dark Rock Pro 4 is a superior model.

But for some reason, you might not be interested in it. Whether it’s for the lack of RGB or a different color scheme, it’s understandable if you need another option.

Therefore in this post, I have listed the top 7 best alternatives to it.

Some of them have a different color scheme or design. Some add RGB to the CPU cooler. But most importantly, they all perform head to head in terms of cooling.

So read the whole post carefully to learn about the best alternatives. 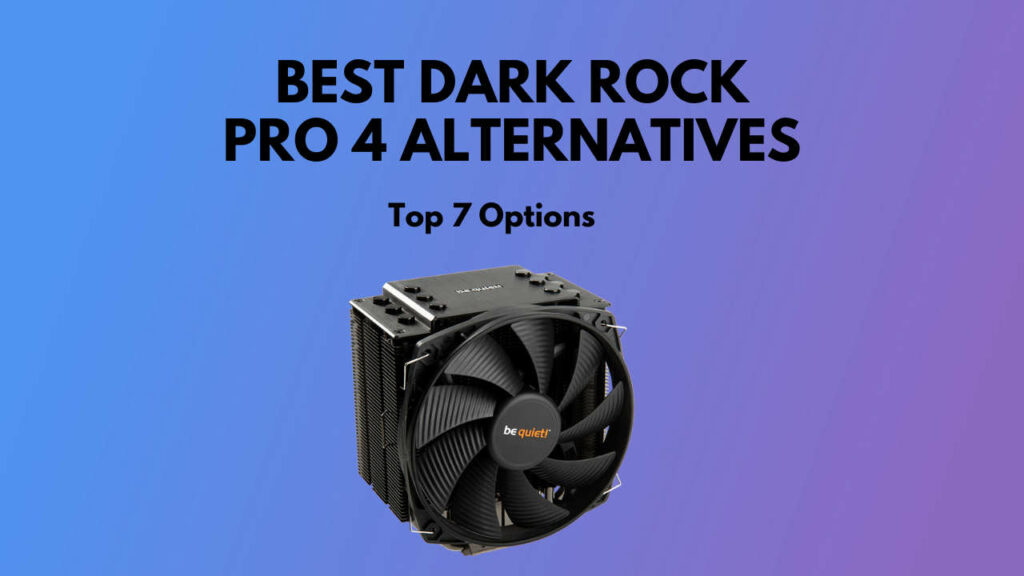 The be quiet! Dark Rock Pro 4 features a dual tower heatsink with two Silent Wings PWM fans that run quietly. Low noise operation is one of the strong points in it.

Hence, while making this list, I’ve included the quietest ones and mentioned the noise levels.

So here are the top 7 best alternatives to the be quiet! Dark Rock Pro 4:

The Cooler Master MasterAir MA624 Stealth is one of the closest competitors to the Dark Rock Pro 4. 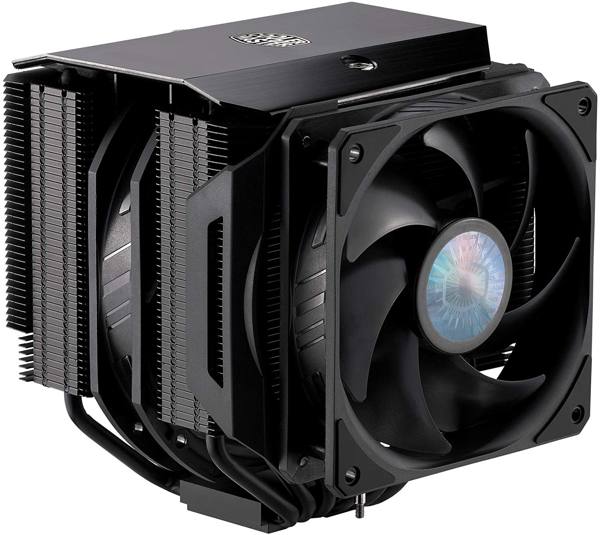 The CPU cooler has a lot of similarities with the Dark Rock Pro 4. For starters, it has the same dual tower heatsink design. The double tower provides enough surface area to cool down powerful CPUs.

A total of six heat pipes are present here, along with a nickel-plated base cold plate. It does an excellent job of dissipating heat. The design and the construction are right on par here.

The dual Cooler Master SickleFlow 140mm fans do a fantastic job providing high airflow in a push-pull configuration. In terms of airflow, there are no lackings.

Cooler Master includes a third optional 120mm fan. You can use it instead of the front 140mm fan for better RAM slot clearance. Cooler Master is doing a great job of taking care of clearance as these dual tower CPU coolers tend to be pretty huge.

In terms of cooling performance, the Cooler Master MasterAir MA624 Stealth goes on par with the Dark Rock Pro 4, so there’s nothing to worry about. It can cool down high TDP and overclocked CPUs pretty well. The design is also excellent with a sleek black color scheme and the top cover with a premium finish.

In terms of acoustics, the dual fans produce less noise for the most part. Unless you push the fans at their 100%, they will be virtually inaudible.

Overall, the Cooler Master MasterAir MA624 Stealth is an excellent alternative to the Dark Rock Pro 4 that can cool powerful CPUs efficiently with less noise output.

The DeepCool NEPTWIN white is a serious bang for the buck dual tower CPU cooler. 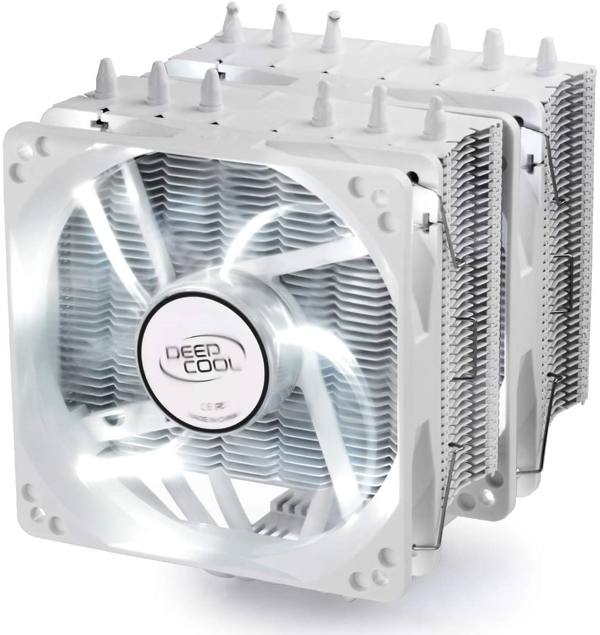 The DeepCool NEPTWIN white performs surprisingly well for its price. Other CPU coolers that perform close to it are 1.5 to 2 times the price of it. So it gets a huge advantage here.

It is also a dual-tower heatsink design with six heat pipes. This configuration is excellent for increased surface area and efficient heat conduction, which results in improved cooling.

The CPU cooler is capable of cooling powerful high-end CPUs. We are talking about up to 140W TDP on AMD CPUs and up to 150W TDP on Intel CPUs. That’s a fantastic feat right there.

You get two 120mm fans with white LEDs on them. And yeah, the CPU cooler is white. It will blend nicely with any white color rig. It is one of the few dual tower CPU coolers that have an all-white color scheme.

The build quality is top-notch here. The noise levels are pretty low. Despite having two fans, they don’t produce much noise, so that’s a plus. The installation system could be a bit seamless tough.

All in all, the DeepCool NEPTWIN white is a great cooler that ticks a lot of boxes. It’s affordable, highly performing, quiet, great looking. You would have a hard time finding all of these together in another CPU cooler. 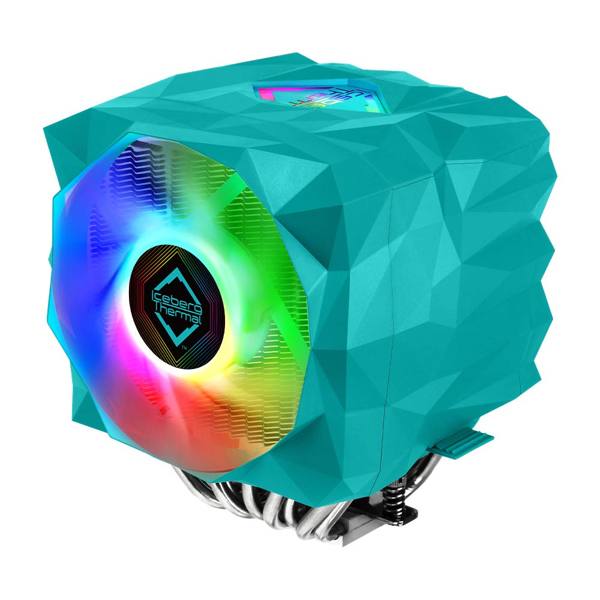 Right out of the bat, the appearance of the Iceberg Thermal IceSLEET X9 Dual will catch your attention. The design of it is unlike any other CPU coolers. It looks like a big chunk of iceberg, no kidding. It also has ARGB lighting in it.

The insides are pretty hefty too. We’re looking at a dual-tower cooler with nine heat pipes and nickel plating. It promises a robust cooling performance and keeps it.

Included are two PWM fans. One is a 120mm PWM fan that goes up to 1850 RPM, while the other is a 140mm 1600 RPM PWM fan. Both feature fluid dynamic bearing and brass housing for less vibration and noise output.

The Iceberg Thermal IceSLEET X9 Dual stays reasonably quiet. It barely produces any noise at low to medium loads since it has an auto start-stop feature that allows the fans to be off until it reaches a specific load. So during low loads, the CPU cooler is dead silent.

At its peak, the sound level maxes out at 35 dBA, which is quite bearable for most people. Regarding RAM clearance, you get to install RAM modules of a maximum height of 46mm.

Overall, I think the Iceberg Thermal IceSLEET X9 Dual is a solid choice for anyone looking for a unique-looking CPU cooler with high performance and low noise operation. If you’re not a fan of the design, though, there are other options in this list.

The Gigabyte Aorus ATC800 RGB is one of the best-looking CPU cooler alternatives for the Dark Rock Pro 4. 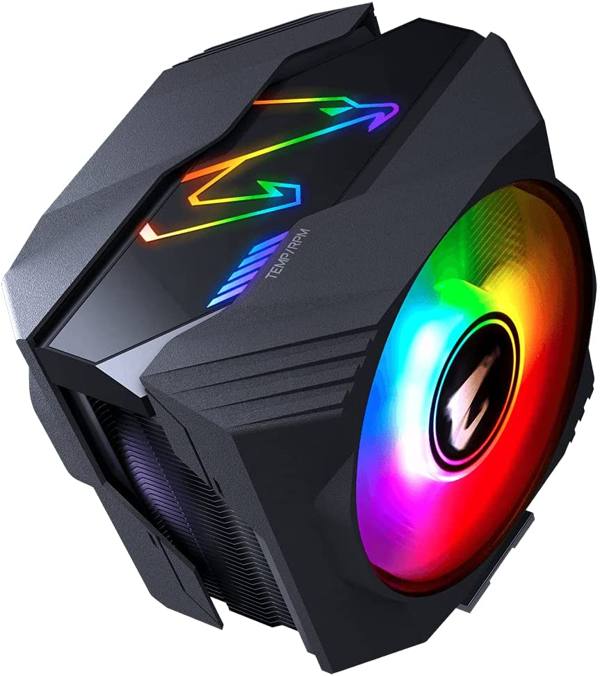 The most attractive aspect of this CPU cooler is its design. The Gigabyte Aorus ATC800 RGB has got a stealth RGB look to it. Most gamers would love a design like this.

The whole CPU cooler is black-colored. The top features an ARGB logo that looks sick. There is also an RGB indicator that changes color based on your CPU temperature. It is a unique feature in this CPU cooler.

In terms of performance, the Gigabyte Aorus ATC800 RGB does a great job of cooling. It can cool CPUs with up to 250W of TDP. So you can use it to cool overclocked CPUs too.

The fans are 120mm in size and support PWM. So, when you’re not heavily using the CPU, they’re near silent. Even under load, the CPU cooler manages to stay under 35 dBA. Therefore it does pretty good in terms of acoustics.

I have only one gripe with this CPU cooler: you have to take out the motherboard to install it in some PC cases. It can be a pain if you’ve already built your PC.

Other than that, the Gigabyte Aorus ATC800 RGB is a gorgeous CPU cooler that looks superb on gaming rigs and performs reasonably well.

The ID-COOLING SE-207-XT-BLACK is a beefy CPU cooler that you can use on overclocked CPUs.

Key highlights of the ID-COOLING SE-207-XT-BLACK: 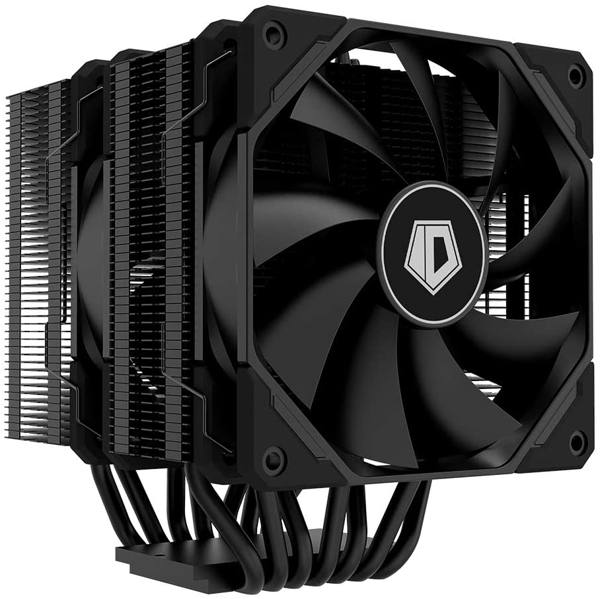 The CPU cooler features seven heat pipes and a dual tower design with an optimized fin design. Both of them allow for more efficient cooling and higher TDP support. As such, the ID-COOLING SE-207-XT-BLACK supports a CPU with up to 280W TDP.

Therefore, you can task the CPU cooler to cool your overclocked CPUs as well. It is a surprising feat for an air cooler to provide such high TDP cooling support.

The ID-COOLING SE-207-XT-BLACK includes a dual 120mm PWM fan that can rev up to 1800 RPM. Despite such high-speed fans, the CPU cooler tends to be quiet in most scenarios. It is due to the optimized airflow and fan blades, along with quality bearings.

You also have the option to install a third fan. It is a great option to have, especially if you want to put an overclocked CPU. Bear in mind, though; it will bump up the noise levels.

By default, it provides 35mm RAM slots clearance. You can move the front fan upwards to get additional clearance up to 50mm, which should be enough for most RAM modules.

All in all, if you can ignore it being loud at 100% load, the ID-COOLING SE-207-XT-BLACK is a solid alternative to the Dark Rock Pro 4 in terms of thermal performance.

The Noctua NH-D15 is one of the best CPU air coolers in the market that even outperforms the Dark Rock Pro 4. 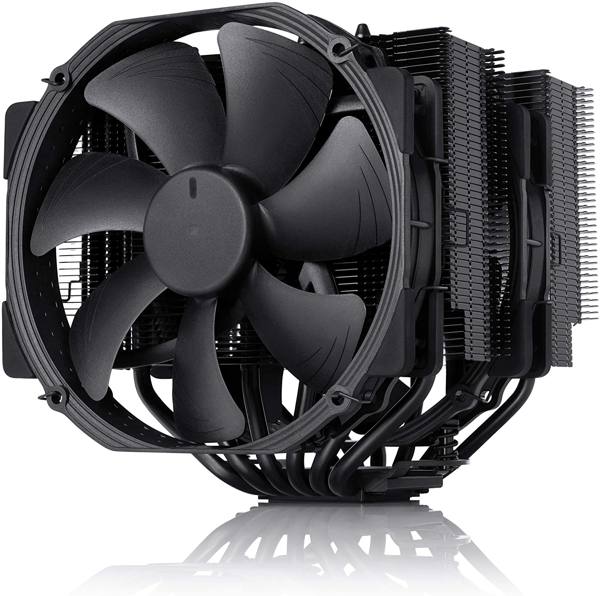 The CPU cooler is enormous. With its dual-tower structure, its height is 160mm. Make sure your PC case is big enough to fit it.

The dual-tower heatsink makes for a more extensive surface area. With the highly-rated dual NF-A15 140mm PWM fans, the air cooling performance of it is mind-blowing.

It provides RAM clearance of up to 64mm in height in single fan mode due to its recessed lower fins. In dual fan mode, you can only use memory modules of a maximum height of 32mm.

For a cooler of this size and with two fans, it is hushed. The mounting system is one of the best in the market, featuring SecuFirm2 mounting system.

Overall, the Noctua NH-D15 is one of the best choices for overclockers and enthusiasts for its superb cooling performance and low noise operation.

The Scythe Ninja 5 is a top option regarding a quiet CPU cooler for overclocked CPUs.

Top highlights of the Scythe Ninja 5: 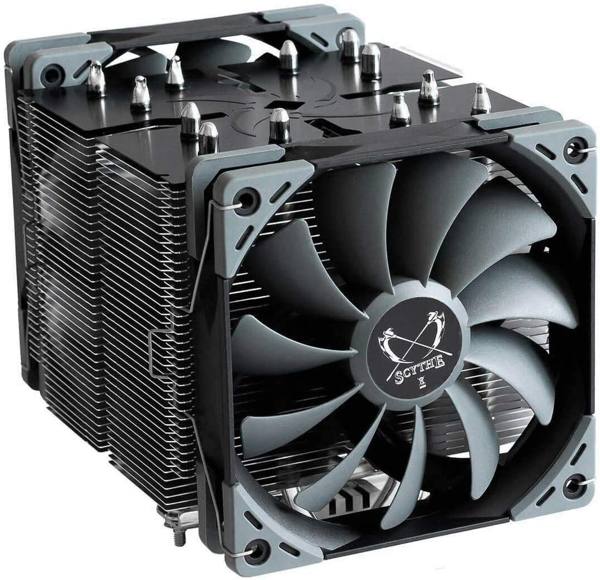 The Scythe Ninja 5 has a massive single tower heatsink. The heatsink is designed to allow you to install up to 55mm tall RAM modules, so there’s enough clearance for that.

The CPU cooler is very efficient, performing similar to some of the better AIOs in the market. You can quickly cool overclocked CPUs with the Scythe Ninja 5.

The vast tower needs two fans in a push-pull configuration for enough airflow. It has two Kaze Flex 120mm fans with anti-vibration pads on them.

And I must admit,

With Sealed Precision Fluid Dynamic Bearings, these are the quietest CPU cooler fans on this list. They top out at only 14.5 dB(A), even under heavy loads.

To sum up, the Scythe Ninja 5 is an efficient, quiet, high-performance CPU cooler. If you need a beefy cooler, it is an excellent option.

So out of all the great options, which one did you like? I am a fan of the DeepCool NEPTWIN white for its high value for money. If I need something beefier, the Scythe Ninja 5 is a great option too. 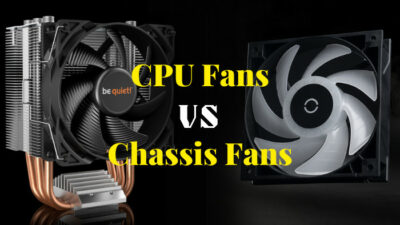 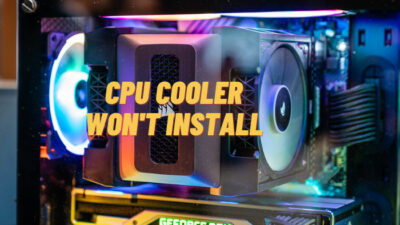