​Csrss.exe - What is it? And How To Remove Csrss.exe

Have you ever noticed an unknown application named Csrss.exe running on your Desktop after opening the task manager?

I know that, you didn’t install this application. 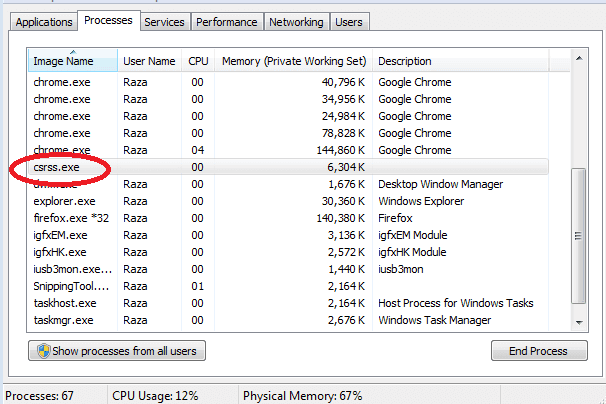 Is Csrss.exe safe for my PC? Is it a malicious application or a default application for Windows?

Don’t worry. You will get to know everything about Csrss.exe after reading the whole blog.

In this post, I am going to tell you about Csrss.exe and will also tell you whether you should remove this application or not.

Quick Navigation
What is csrss.exe?
crss.exe Virus Type
Should I Disable Csrss.exe?
Is csrss.exe Safe?
Identifying Risk of crss.exe by it's Location
How Does csrss.exe Malware Harm your PC?
How to Remove Csrss.exe Permanently
Step 1: Use System Restore
Step 2: Use Antivirus
Final Thoughts

Csrss.exe stands for Client Server Runtime Process. Csrss.exe is a process which is required for managing the majority of the graphical instruction sets under the Windows operating system.

So, you might wonder that this application is safe to run in the background.

But here is the kicker:

As Csrss.exe is a common system process, some malware like Trojan usually uses a process title of Csrss.exe to camouflage itself.

You may find this app showing up in the task manager without installing manually.

Is csrss.exe a virus?

The answer to this question is a bit tricky, this application normally doesn't cause any harm. But there are virus too which are named exactly the same. so, you will have to check if your one is a virus or not.

Should I Disable csrss.exe?

Well, you cannot disable csrss.exe as it is an important part of Windows. But if your one is creating any problem then I have a fix for you.(more on that later)

If you try to disable Csrss.exe then, Blue Screen of Death will show up.

Though, there is no valid reason to disable this process, anyway—it uses a very small quantity of resources and performs a few critical windows system functions.

If you try to end the Client Server Runtime Process from the task manager, you will notice that, Windows reports you that the PC will become abortive or will shut down.

This server runtime process is a bit critical process as Windows always launches this process at startup. If csrss.exe doesn’t launch at startup, Windows will show blue screen of death with error code 0xC000021A.

csrss.exe is safe unless any virus is encountered running with its name.

As I mentioned it earlier, the csrss.exe file is located in the C:\Windows\system32 directory on your system.

To verify whether Csrss.exe is in that location, you can right-click it opening the Task Manager and select Open file location. 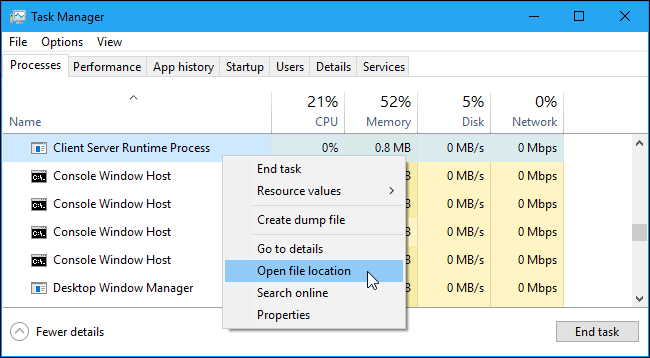 You can also know if Csrss.exe is safe or not by running an antivirus scan or uploading the file to virustotal.com.

Anyways, if the csrss.exe file is in any other directory than the current position I mentioned then, you have a problem.

Identifying Risk of crss.exe by it's Location

How Does csrss.exe Malware Harm your PC?

With the infected Csrss.exe virus, your Desktop may reach a remote host for the following purposes:

ProTip: If you are into gaming, then check out how to overclock your monitor easily and improve your shooting skills.

How to Remove Csrss.exe Permanently

I have mentioned earlier that Csrss.exe is a default application from Windows and I also told you not to disable it.

What to do to stop the risk factors caused by Csrss.exe?

System restoring is a way to avoid the risks of Csrss.exe.

Here's how to remove csrss.exe:

At first remove your free antivirus, if you have any.

Then use a good antivirus can also be a great help sometimes.

But make sure you use a trustworthy Antivirus to scan your computer.

Most of the cases, antiviruses consider such applications as a threat.

I think you will agree with me to a point that:

Removing a mysterious application like Csrss.exe is better than keeping it in your Computer.